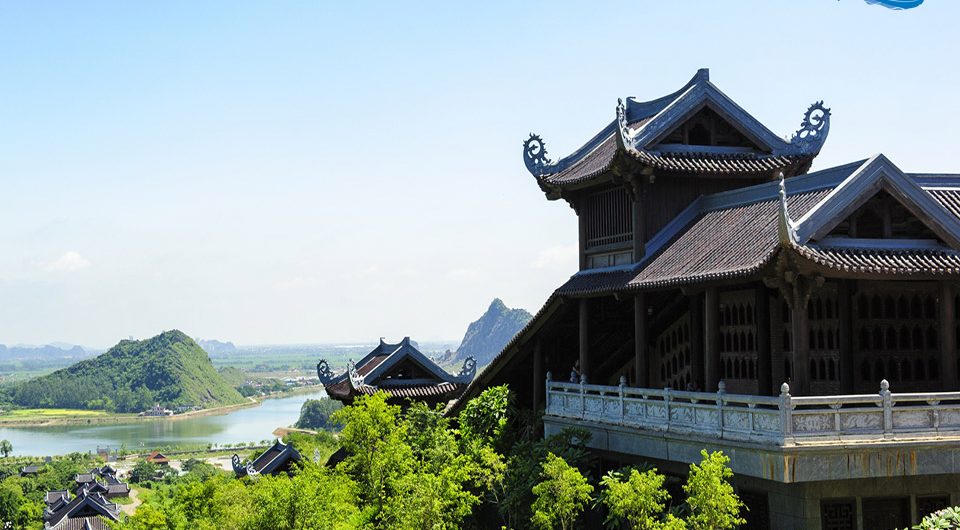 Bai Dinh pagoda is a large population known as many records such as the largest pagoda of Vietnam, the biggest gold – plated copper of Asia and the longest lobby in Asia. The pagoda is located at the western of the ancient capital Hoa Lu, belonging to Gia Sinh Commune, Ninh Binh. It is far about 15 kilometers from Ninh Binh province and 95 kilometers from Hanoi. Bai Dinh Pagoda is a religious complex covering a total area of 539 hectares, with both the ancient and the newly renovated Bai Dinh pagoda, parks, car parking, and lake system. 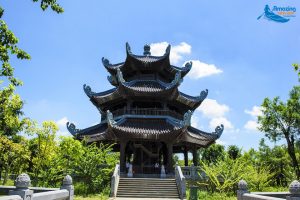 The New Bai Đính Temple (Bái Đính Tân Tự) encompasses an area of 700 hectares, located on Ba Rau hills, near the Hoang Long River. This is a large complex which includes many structures built in several phases starting in 2003 and finally completed in 2010.[2] The temple’s architecture follows traditional lines, consisting of large halls, courtyards, and enclosures, but the huge scale of Bai Dinh makes it strikingly different from previously built Vietnamese Buddhist pagodas. The largest structure, the Tam Thế Hall, rises to 34 m at its roof ridge and measuring over 59 m in length.[2] The construction materials are locally quarried stone and timber from Ninh Bình, tiles from Bát Tràng… although reinforced concrete was also employed for the scale of construction. Despite this, the temple adheres to traditional Vietnamese designs with its curved finials and corner eaves soaring outward and upward, likened to the phoenix’s tail. Interior decorations were selected specifically for artisanal works from the local handicraft villages, among which are the bronze workers of Ý Yên, stone carvers of Ninh Van, wood carpentry of Phú Lộc, embroidery from Ninh Hải. 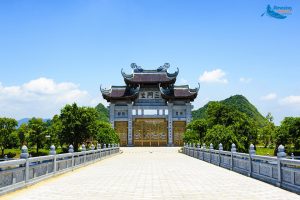 The original Bai Đính pagoda is located in the foothills some 800 meters from the new temple. Ascending a series of over 300 stone steps, the path passes under an ornamental gate to reach the entry. The temple itself is located in a series of small caves on the mountainside. Along with Buddhist deities, natural spirits of the mountains are also venerated.

The most important emphasizing point of these great religious works is Tam The Temple and Phap Chu Temple. Two temples cover a total area of 1,000 square meters. The height of Phap Chu Temple is up to 22m and it contains five partitions. In the center of this temple is a bronze Buddha Sykamuni statue with 10 meters high and 100 tons heavy which is certificated as the biggest statue in Vietnam. In Tam The Temple, there are three Tam The statues representing the past, the present and the future. Each statue is 12 m high and weighs 100 tons.

Another special feature in Bai Dinh pagoda is “Great Bell” with the weight of 36 tons was cast and located in Bell Tower. In addition, there is 70 -ton bronze drum on the floor of the Tower. What’s more, coming to Bai Dinh pagoda, visitors have a chance to see the biggest Avalokitesvara Bodhisattva statue in Bodhisattva Temple. This statue looks so marvelous with thousand hands and eyes to present the protection and universal salvation for common people. 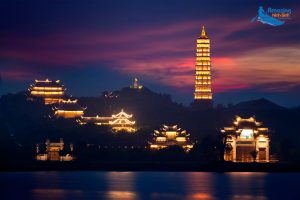 Furthermore, visitors will be astonished at the collection of 500 Arahat statues on the hill on the right – hand side of Phap Chu Temple. The 500 Arhat statues with the height of 2.3m, carved by Ninh Binh stone have different positions and gestures that create magic space and lively atmosphere. 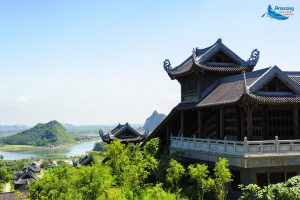 Without a doubt, Bai Dinh pagoda is the masterpiece of both nature and men and it is the pride of Vietnamese people in terms of unique architecture, culture and historical value.

Larryadase
Reply
Cryptobank MinePlex is a full-fledged banking https://mineplex.io/?utm_source=anonymous and blockchain solution in a mobile application with its own debit crypto card for easy and quick use of cryptocurrency every day

Leave a Reply to Larryadase