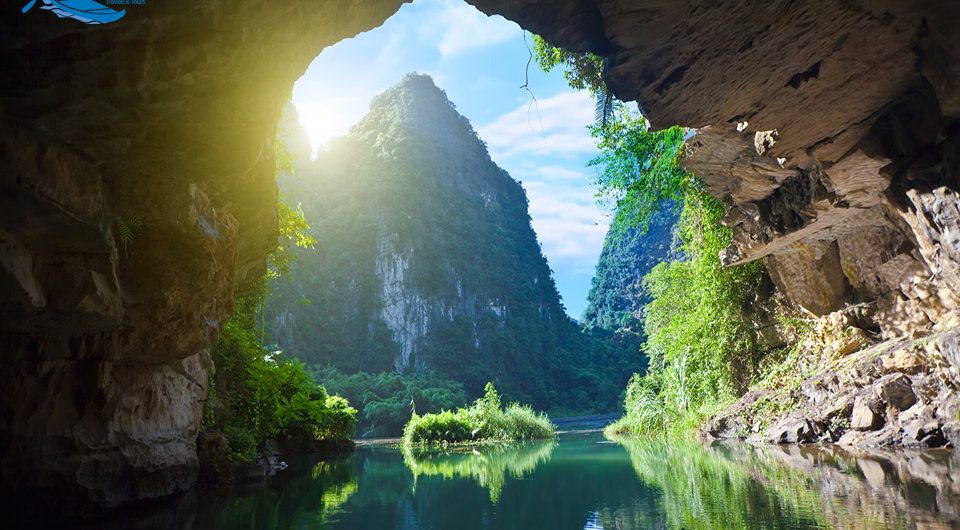 With the country’s second most beautiful cave, Bich Dong Temple in Hoa Lu Commune, Ninh Binh Province is a must for tourists to the area located 200 kilometers to the southeast of Hanoi. 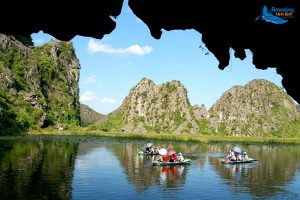 Bich Dong temple was built on a limestone mountain that was formed millions of years ago and it was named in the 18th century after the beautiful white limestone which exists only in this area. 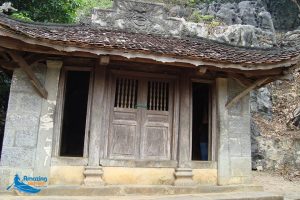 Bich Dong Pagoda was built by the collective and missionary works of 2 Buddhist monks: Tri Kien and Tri The. All three pagodas of Bich Dong have wooden architecture due to the architectural style of the time at the end of Le Dynasty and in the beginning of Nguyen Dynasty. They were arranged according to ascending order of the position of Bich Dong Mountain like a Chinese letter: “Tam”. Ha Pagoda (Lower Pagoda) is located at the foot of the mountain, Trung Pagoda (Middle Pagoda) is on a mountainside and Thuong Pagoda (Upper Pagoda) is situated on top of the mountain. All 3 pagodas backs leaning against the mountain.

The whole construction included three small temples with the first at the foot of the mountain, the second at the entrance of Bich Dong cave and the third, also the smallest, on top of the mountain, viewing the whole stunning green valley below. All three temples are made from rare wood, with tiles formed like the tail of a phoenix or the blade of the ancient weapon, seeing the construction come to life. From a distance, the temple looks like a wooden boat floating on the river. 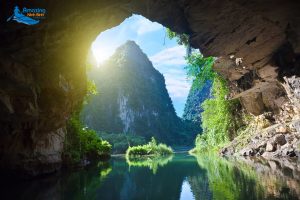 Like many other pagodas in the North of Vietnam, Ha Pagoda has the floor plan of a Chinese word: “Dinh” (工). The roof of pagoda has 2 storeys and 8 roofs. The eaves of the pagoda are very broad and constructed by 6 stone steps. The two gables of the pagoda and fence were built of stone. The upper temple was built of monolithic square stone pillars. 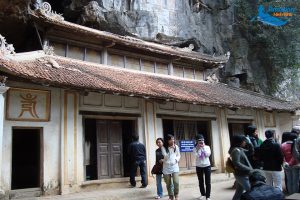 Leaving Ha Pagoda for Trung Pagoda, arriving at front-yard of Trung Pagoda, the most impressive feature is the picture of the Chinese letters “Bich Dong” granted by Tinh Do Vuong Trinh Sam; and Nguyen Nghiem complied with the order to carve it on a front cliff of Trung Pagoda.

Trung pagoda heads west wards, and has floor plan of a Chinese word: “Dinh”. The roof of pagoda has 2 stories, the upper temple has 3 rooms, and the forecourt has 3 rooms. Standing inside Trung pagoda, tourists do not feel that they are staying in a mountain cave because this pagoda was designed like many ground pagodas with a tiled roof, and walls that cover the cliffs. 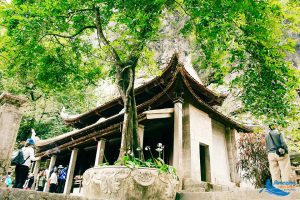 To reach Thuong pagoda (upper pagoda), tourists have to get through the Dark Cave or Blue Cave and climb up 40 stone steps on the mountain side. For a long way up to the top of Bich Dong pagoda, tourists are awarded a panoramic view of dramatic limestone ridges and dotted hamlets and a particularly refreshing moment.

Although going through a lot of reconstruction, the beautiful temples and cave make it a destination that everyone must visit once in a lifetime.