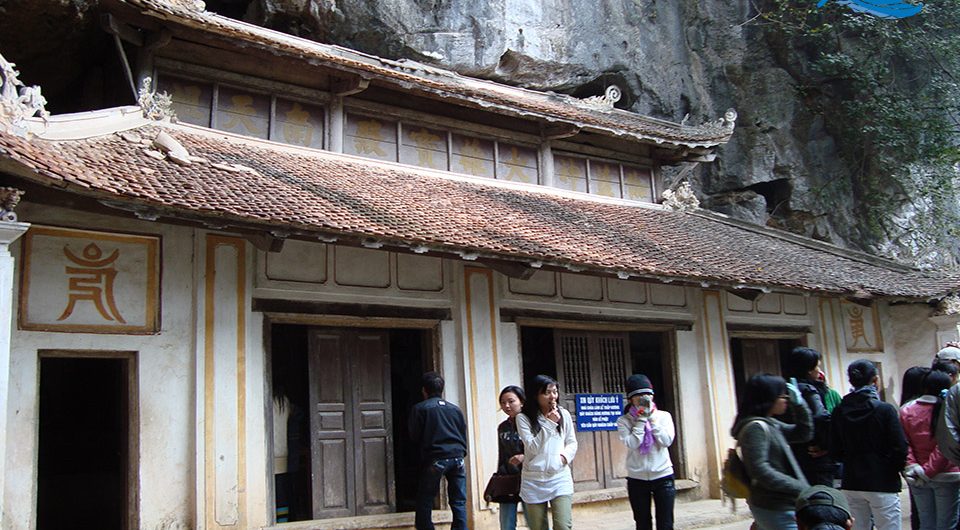 Having been considered “The second most wonderful cave in Vietnam”, Bich Dong Cave is the place of natural beauty convergence. Like many cave in Ninh Binh Vietnam, Bich Dong Cave contributes to the spiritual tourism potentials of this province thanks to the system of the pagodas inside the cave. 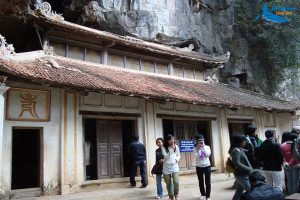 The origin of Bich Dong Pagoda

In 1705, the two monks from Nghia Hung district, Nam Dinh province encountered and swore brotherhood. They are the monk Tri Kien and the month Tri The. Both of them were devout Buddhists, they wanted to spread Buddhism to many places and build the temples. Here in Bich Dong Mountain, the landscape is dramatic and there also had a pagoda. The two monks decided to call a halt and repair the old pagoda themselves. They went and asked for the donation of the residents to turn the old one into three pagodas: Ha (Lower), Trung (Middle) and Thuong (Upper) Pagodas These places were for leading a religious life. In 1707, two monks Tri Kien and Trinh The casted a large bell now hung on the Dark Cave. On the bell written the destiny and purpose of the two monks when erecting Bich Dong Pagoda.

On 1774, Lord Trinh Sam visited the pagoda and named it as “Bach Ngoc Thanh Son Dong”, which means the pagoda made of blue stone has the beauty of white pearl.

Like many ancient pagodas under Later Le Dynasty, Bich Dong Pagoda have wooden architecture, brick tiles; all the roofs have four up curved corners as the image of the swords or the tails of phoenix…

The position of three pagodas is like the Chinese character “Tam” (三). The backs of all three pagoda lean against the mountains. They were built from the foot to the top of the mountain’

Ha Pagoda has 5 which is erected on a high platform at the foot of the mountain. The Pagoda was used as house of worshiping the Buddha. The trusses, the crossbeams, the spars are made of ironwood. The 4-meter stone pillars in the pagoda are all monolithic without any joints.

The altars in Ha Pagoda are arranged in hierarchy with four rows of Buddhist statues. The statues of Past, Present and Future Buddha (also called Tam The) are in the top row; the statues of Di Da Tam Ton are in the second row from the top, the statue of Avalokiteśvara Bodhisattva with a thousand eyes and hands in the third row; in the fourth row is the statue of Thich Ca So Sinh (Baby Buddha). Below the rows of statues is incense burners and candles which create the sacred atmosphere in the pagoda.

From Ha Pagoda, the tourists joining Ninh Binh tour will climb up 120 S-shaped steps to the halfway of Ngu Nhac Mountain where Trung Pagoda is situated. On the front cliff craved the two letters “Bich Dong” This is an extraordinary pagoda with the open front and the back inside the cave.

After worshiping the Buddha in Trung Pagoda, the tourists go up 21 steps to Dark Cave. This is the main cave with the mysterious atmosphere and the artworks by the Nature. Inside the cave are the image of fairy, Buddha, little boys, flying dragon, swimming turtles…

The pagoda has the two-tier roof. Under the top roof are ten Chinese characters: Gia Lam Than Dai Hung Bao Dien Nam Tien To, which are explained that this is the place where all the ancestors of Buddha in this southern country made their departure.

The precious remains in the pagoda are the bronze bell with sophisticated engravings, the three huge stone statues of  Amitabha Buddha, Van Thu Bodhisattva and Thi Kinh Bodhisattva.

Thung Pagoda was built on the top of the mountain. To reach Thuong pagoda, the visitors climb up 40 steps.

There are two shrine in the sides of Thuong Pagoda to Tho Dia (the God of local land) and Duc Son Than (the Saint protecting mountains). Beside Thuong Pagoda is a pool called “Cam Lo water pool” (a magic water considered curing all disease) of Bodhisattva. In front of the pagoda is the Ngu Mon field. Standing in Thuong Pagoda, you will find that Bich Dong pagoda and its surroundings are so poetic and scenic.