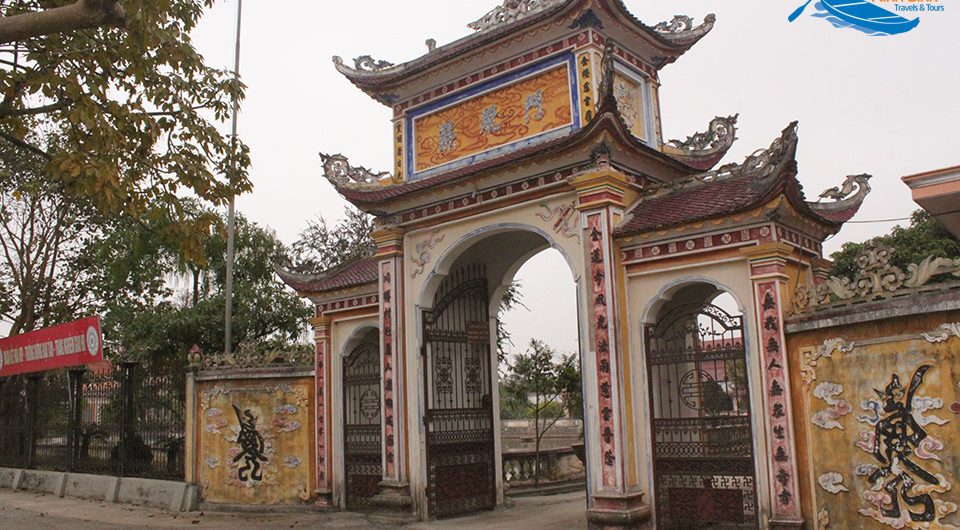 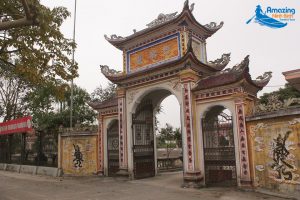 In 1829, a monk Le came to this place to build a pagoda, was supported by Nguyen Cong Tru, so Nguyen Cong Tru selected the highest land in the center of Dong Dac commune to build the pagoda.

The temple is considered the earliest religious architecture in Kim Son, built before the architectural complex of Phat Diem church dozens of years. After the ups and downs of time, Dong Dac has been restored and rebuilt many times and most recently about 60 years ago. If you take Hoa Lu Tam Coc tour, you will be surprised with the interesting typical architecture in Vietnam.

The overall architecture of the pagoda is built from entire ironwood such as wooden posts, trusses, crossbeams, and spars. The protrusions of the truss, pillars, planks hot, backboards, door …… are carved clouds and flowers, sculpted beautiful artwork. In front of the Upper Hall, there is a golden door decorating the worship room. All of them exemplify the talents and craftsmanship of the ancient Kim Son artists who later more famous through other unique architectural works such as the architectural Hoa Lu, Phat Diem church.

The pagoda was built in the west, the front of the seven big worship rooms have statues of Duc Ong, Duc Thanh and two statues of the Ho Phap. At the Upper Hall, there are the Buddha statues put from high to low, including 5 rows of statues. The Buddha statue is sitting, the mouth with a gentle smile, straight nose, eyes look down like they shine your soul. All statues of the Buddha are majestic, benevolent, lacquered gold in gorgeous shimmering candlelight.

If visitors of Ninh Binh special daily tour would like to adventure more about the style of pagodas and temple in Vietnam, there are some perfect destinations as follows.

Bai Dinh Pagoda is one of the most famous pagodas in Vietnam with many records set as the largest bronze Buddha statues in Asia.

The temple is located about 95km south of Hanoi center with many interesting for you to visit and explore.

Non Nuoc Pagoda in Ninh Binh is an ancient temple and also a national historical monument. The pagoda is located at the foot of Non Nuoc Mountain, on the banks of the Day River and the mouth of the Van River. From the temple to view the distance, visitors will see the peaceful and tranquil scene of the villages of Vietnam.

Temple of King Dinh Tien Hoang is located in Truong Yen, Hoa Lu, Ninh Binh, in the center of the ancient capital of Hoa Lu. This is the only place in Vietnam worshiped at the same time King Dinh Tien Hoang, his parents, and sons and had the altar of the Dinh Dynasty. King Dinh Temple together with King Le Temple was ranked “Top 100 100 famous works in Vietnam”.