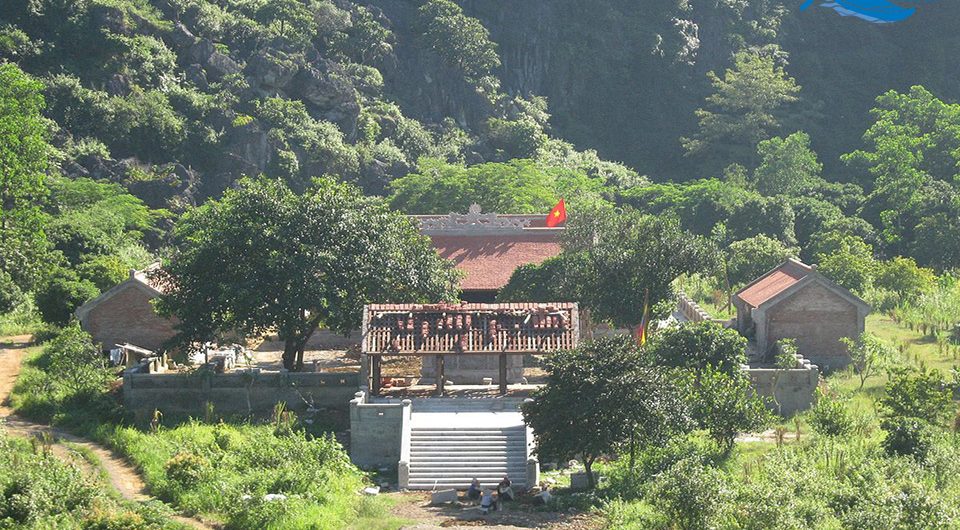 Ninh Binh Vietnam is the land of brilliant historical events. Each famous place here seem to be related to the stories of national construction and defense in the past. One of those place is Hoa Lu Cave in Gia Hung Commune, Gia Vien District. If you are on your Hoa Lu Tam Coc Tour, don’t forget to visit this historical site. 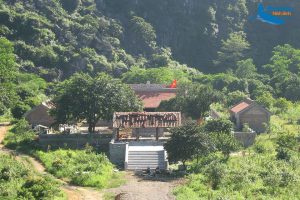 Hoa Lu Cave is the the very first military base of Dinh Bo Linh army in the 10th century. The cave is 15km of Hoa Lu ancient capital and 20km of Ninh Binh city center to the north.

In fact, Hoa Lu Cave is a large valley on land of about 5 hectare surrounded by bow-shaped ranges of mountains. Hoa Lu Cave belongs to the limestone system along the right side of Day River.

Hoa Lu Cave is firmly protected by rocky mountains. There is only a small pass of 30m high as the entrance. Surrounding the cave is Cut lagoon with a length of 3km and a width of 500m. The lagoon is like a natural trench to defend the cave with rough slopes.

Along with Hoa Lu Ancient Capital, Hoa Lu cave or Lau Valley is the relic of the life of Emperor Dinh Tien Hoang. Legend has it that, in his childhood, Dinh Bo Linh with his fellows often grazed their buffalos there, joined the war game and used reed as the flag. Dinh Bo Linh was honored as the commander.

According to the researchers, the reasons Dinh Bo Linh selected Hoa Lu Cave as the military base were that the cave had only one entrance, difficult and dangerous terrain, rocky defend walls, mysterious legends and ensured the secrets of military. When the base and defend system were broken through, Dinh Bo Linh force could follow the small passes hidden in the grove of plants or the water way to escape to Hoa Binh. During the important historic event of defeating the 12 rebellions warlords, Dinh Bo Linh once again chose Hoa Lu Cave as the base to nourish a well-trained force.

The origin of the name

Despite the conclusion of Sino-Vietnamese language researchers that Hoa Lu is only a proper noun and the name of a place but not the name of person, god or things, people still give many opinions on the name.

Hoa Lu is reed flowers. This explanation is quite reasonable because Hoa Lu is the land of reed. Reeds grow around the cave and were the symbol of Emperor Dinh’s childhood. Nowadays, to remember the merit of him, people still put the reed on his altar in Hoa Lu Cave.

In some historic documents, Hoa Lu was scripted as the entrance of flower village.

In some couplets of ancient pagodas and temples, Hoa Lu was also written in Sino-Vietnamese language with the meaning of a flowered oven. Even in the horizontal lacquered board inside Hoa Lu cave, the name Hoa Lu showed that it was a flowered oven. Simply, it can be explained as rice holder carved flowers.

However, the most common meaning of the name is reed flowers the beautiful plant of Hoa Lu, Ninh Binh.

Hoa Lu Cave with three small altars for worshiping Emperor Dinh Tien Hoang and the mandarins under Dinh Dysnasty is the ideal destination for the tourist having Hoa Lu Tam Coc 1 day tour to understand more about the history of Vietnam.