Vietnam has experienced many ups and downs, the capital of each dynasty was changed so many times. But the Vietnamese themselves cannot forget the land was a place where is the capital of three dynasties in the past. Ninh Binh Vietnam, the capital experienced the ups and downs of the three dynasties: Dinh Dynasty, Tien Le Dynasty, Hau Ly Dynasty, and now become “dream” of many visitors. Come to Ninh Binh and admire the land of history. 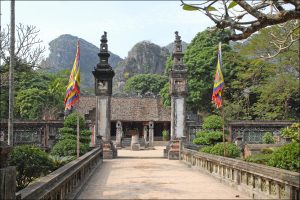 Considered as the capital of the first feudal state in Vietnam, ancient relics of capital Hoa Lu still retain many palaces, temples, and tombs of high cultural value. Stopping in Hoa Lu, travelers of full day cycling in Ninh Binh will feel like stepping into another world, so that the flow of time let them back to ancient times, be immersed in the anecdotes and suddenly rise to the national pride.

The temple is located in Truong Yen commune, Hoa Lu district on a 5ha campus, which is an important relic of Hoa Lu. In front of the temple is the Ma Yen mountain shaped like a saddle. On the mountain, there is the tomb of King Dinh.

Dinh Tien Hoang Temple is a unique architecture with the wood carvings of folk artists in Vietnam in the 17th – 19th century. King Dinh Temple is also a unique artwork with many rare antiques such as brick building palace with Dai Viet National inscriptions, columns of Sanskrit Buddhist inscriptions.

King Dinh Temple is located among the trees canopy, the orchard, interwoven bonsai creating the majestic appearance of the temple.

Temple of King Le Dai Hanh is a cultural and historical relic belonging to the ancient relic of Hoa Lu in Ninh Binh province. The temple is 300 meters from King Dinh Tien Hoang Temple. Le King temple is smaller scale so the space in the temple is quite familiar and fanciful.

Thai Vi temple was built on the old foundation of the royal step-over palace in Tran Dynasty, is worshiping King Tran Thai Tong and Tran Thanh Tong. The temple is located in Van Lam village, Ninh Hai commune, Hoa Lu district, surrounded by greenery, the rice field, giving a very peaceful feeling for visitors. Every three years, in the year of the Mouse, Horse, Cat, and Tiger, at Thái Vi temple the festival from the fourteenth to the sixteenth day of the third lunar month attracts many visitors of amazing Ninh Binh tour.

Named as “The second beautiful cave in Vietnam”, Bich Dong Pagoda is located 3km south-west of Dinh Cac Boat Station and is located on Bich Dong Mountain. This ancient structure was built in the style of letter “three”, three non-contiguous temples on three levels along the mountainside, based on the mountain from the foot to peek, forming three separate pagodas which are Lower, Middle and Upper pagoda. As a result, pagodas, mountains, and caves harmonize with each other, hiding in the middle of the large green tree.

This temple was built on the foundation of Vien Quang Pagoda – This temple was built by Nguyen Minh Khong to worship Buddha in about 1121. After his death, people worshiped him there. Temple looks to the South, its architecture is the typical style. In the middle of the main tower, there is an imposing bronze statue of Nguyen Minh Khong sitting in the meditation posture of the Buddha. The temple carries the style of 17th-century wood carvings.

Phat Diem stone church located in Phat Diem town, Kim Son district has an area of about 22 hectares. This is considered one of the most beautiful churches in Vietnam. Especially in the architecture of Phat Diem cathedral church are a combination of Catholic style and the architecture of traditional pagoda of Vietnam. The church was built entirely of stone so people used to call it Stone Church. This is not only the best stone works in Vietnam but also rare in the world.