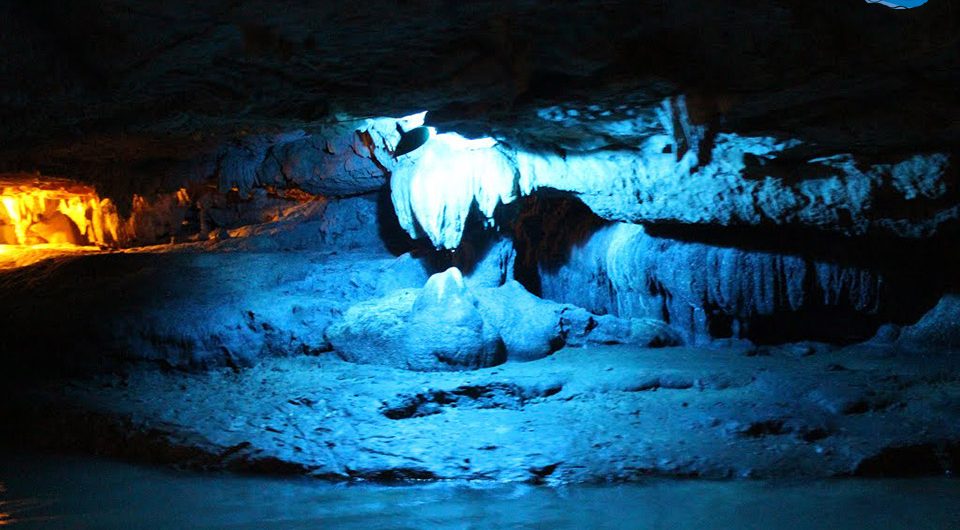 Although it is not as famous as Trang An or Bich Dong, the beauty and mystery of Thien Ha cave really enthralls people who set foot in this cave. It would be an incomplete of your Ninh Binh ancient capital tour if you did not visit this place. 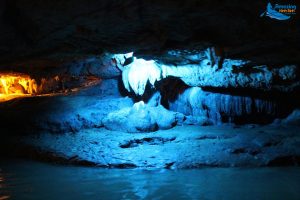 Thien Ha cave is a small cave in Huong Son commune, Nho Quan district, Ninh Binh province. The cave is hidden in Tuong Mount (General Mount), one of Trang An range of mountains. Tuong Mount with a height of 200 meters has been known as a part of the firm natural defensive wall which covered and protected the Southeast of Hoa Lu ancient capital in the 10th century.

On boat from Muong Tho Ha mountain village (Son Ha commune), Ninh Binh tour’s tourists are rowed along Ben Dang River and turned into a one-kilometer canal. Along the canal is Tuong Mount. After that, tourists continue to walk on a 500 – meter stone path at the foot of Tuong Mount to reach the mouth of Thien Ha cave.

Like many caves that you have chance to admire on Hoa Lu Tam Coc tour, at Thien Ha cave, you must come and explore on your foot. That cannot lessen your excitement when going into this fairy land, but that even excite the adventurousness in your blood.

Thien Ha is compared with galaxy on earth not because of its name only. The cave is divide into a dry cave of 200 meters and a water cave of 500 meters.

Dry cave is, though, not large, it gifted the golden and diamond stalagmites which sparkling in the sunshine. Because the cave has a circular hole which let the natural light pour into the bottom, it is not as dark as other caves. In contrast, inside the cave, it is splendid, multicolored and airy.

The shape of stalagmite blocks seem to encourage the imagination of the tourists. You can see a fox enjoying its prey, an elephant sitting on its hind legs, a tiger watching for its quarry, a monkey climbing the tree… Higher is the image of Buddha, Tang Monk (XuanZang) chanting prayers for his disciples… All together create a virtual palace.

In the water cave, tourists continue floating on a bamboo boat on the Milky Way. Stratums of stalagmite twinkling in the sunlight and reflecting the silver-like water look like the stars in the dark sky. Tourists going on boat feel like they are drifting slightly in the galaxy.

The name of each stalagmite block is also interesting, namely Hoa Tien (fairy flowers), Bau sua me (Breast milk shaped block), Ca hoa long (Fish becomes Dragon). The names are meaningful and close to the life of the folks here.

In the quiet space, people can hear the echo of the wind trapped inside the cave. The wind blows though the ravines and sometimes bumps against the rocks, which produces the sound like that of lithopone (a stone instrument). Together with the music from the paddles flapping the water, it performs a natural symphony.