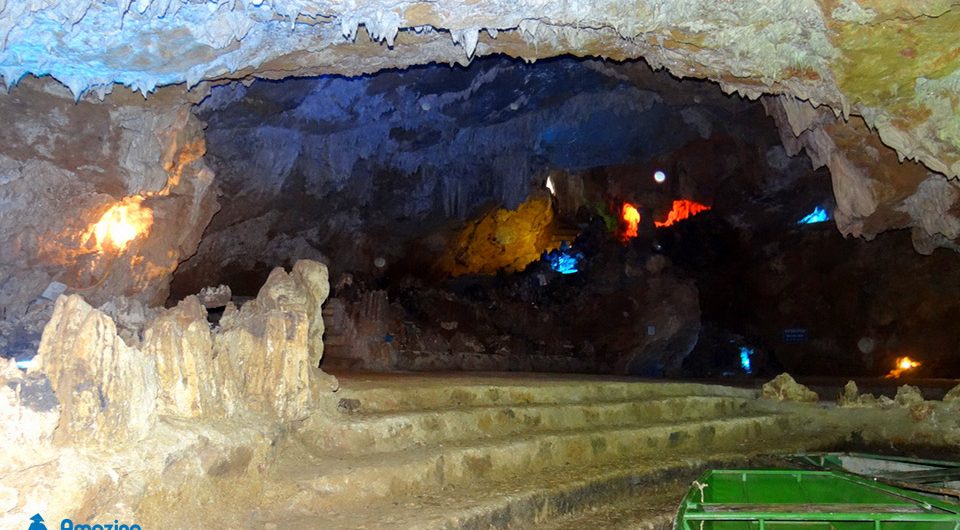 Ninh Binh Vietnam has become the famous destination in Vietnam which attracts many domestic and international tourists because it converges a wide range of unique and attractive tourist sites, in which, the most prominent are spiritual tourism, cultural and historical tourism and cave exploration. It will be incomplete if, in the most attractive part of your cave exploring tour, you have not explored and admired the magic, shimmer, and illusion of Thien Ha cave. 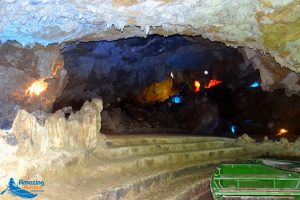 Where is Thien Ha Cave?

Thien Ha cave is a scenic spot in the Trang An World Cultural and Natural Heritage Complex, located in Son Ha Commune, Nho Quan District, Ninh Binh Province, 24km from Ninh Binh City. The cave is hidden in Tuong mountain – a mountain in the Trang An mountain range. Tuong Mountain was considered as a watchtower to protect Hoa Lu in the dynasty of King Dinh Tien Hoang and King Le Dai Hanh.

Thien Ha Cave, located in Tuong mountain with a height of nearly 200m, is a part of a strong natural wall covering the capital of Hoa Lu in the tenth century. It is associated with historical sites such as Pier of Le Dynasty, Mount Buddha head, Dau Linh Field, etc.

From Muong Tho Ha village, Son Ha commune, you have to pass a small canal of about 1 km on the Ben river system. Then, continue to a pedestrian on the stone road 500m at the foot of Tuong Mountain to reach to the cave.

Thien Ha eco-tourism area consists of two main caves: Thien Thanh cave and Thien Ha cave. This is a beautiful cave with magnificent stalactites. The beauty of the cave here looks like “The Milky Way in the Mountain”.

At the end of the canal, there is a road leading to the mountain, visitors of Ninh Binh cycling tour have to step up 157 steps to reach the Thien Thanh cave. This is a dry cave, not very large, its length is just over 50m, however, the beauty of the cave also make people be overwhelmed. The position and surface of the stalagmites and stalactites contribute to the beauty and richness of the cave. The stalactites, with their different shapes, is white as snow and sparkling. Coming here, visitors will be overwhelmed by the magnificent beauty, majestic view of the stalactites stacked on top of each other which form a charming shiny spotlight.

The Thien Ha is located a few hundred meters from the Thien Thanh cave. The gate of Thien Ha cave is not very large, its height is only 3 – 4m, but the inside of the cave appears to surprise and attract people with the beauty of thousands of stone masterpieces carved and arranged meticulously by the hand of Mother Nature. Thien Ha Cave has the length of 700m including a 200m long dry cave and a 500m long water cave.

The dry cave is the highest and widest in Thien Ha, with a width of about 40m and a length of 200m, as well as a myriad of stalagmites and stalactites,  eliciting the imagination of human beings such as the Buddha image, the castle, the image animals, propeller, human ear and so on.

In addition, the dry cave also has a door on the southern slope, called the heaven well. The heaven well is wide and about 2.5-3m high, pouring natural light to the bottom, making the space open and airy. On sunny days, the light reflects on the stalactites, radiating the fanciful and eye-catching colors. This area of Heaven Well also has many vestiges of the ancient Vietnamese living about 7500 – 10000 years ago. Here, the scientists found traces of mollusks, hewing tools, animal bones on the land … The culture is preserved almost intact in the Thien Ha cave, showing a vivid picture of the life of the ancient Vietnamese with the adaptation and creativity in the New Stone Age.

In the water cave, visitors go by boat on the 500m long underground river like the Milky Way. The stalactites on the sides of the river are beautiful as the moon and the stars. The water reflects the sparkling light making the scene more shimmering and fanciful. The long-winded Milky Way as well as layers of colorful stalactites and stalagmites with the legend of Lotus Island, Mother’s Milk, … make visitors be immersed in the scenery and feel that they go astray in the fairyland.

With beautiful and magical beauty, Thien Ha eco-resort is truly “The Milky Way in the Mountain” – a highlight of the amazing Ninh Binh tour for tourists to explore and admire.