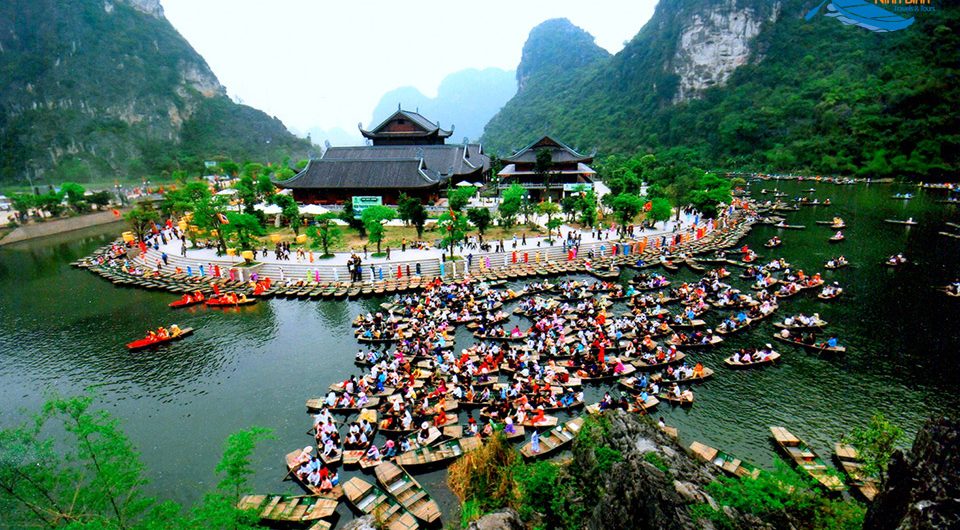 Ninh binh vietnam is famous for a World Natural and Cultural Heritage – Trang An, a beautiful complex, the first mixed heritage of Vietnam and Southeast Asia. This is a place famous for Trang An festival, honoring and promoting Trang An tourism to the world. 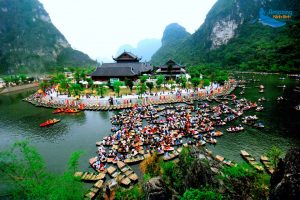 Overview of Trang An festival

The festival is held every year in the third lunar month with special features such as water procession, palanquin procession and dragons procession on the river to express the principle of “When you drink water, remember the source”, gratitude to the Holy Quy Minh Dai Vuong, who has the merit of maintaining the border, protect the country.

According to folklore, he was one of the three brothers, three canonized generals, namely, Tan Vien Holy, Cao Son Holy, Duc Quy Minh Holy, with the merit of protections for Son Nam, to protect the country of King Hung – Hung Due Vuong. He is a “the supreme god”,  was ordained by many kings in many dynasties, worshipped by people in many regions with a heart of respect.

The festival has nearly 1000 boats to take visitors into a region of charming landscapes to enjoy the masterpiece of Mother Nature, admire the beauty of “Halong Bay on land tour”. These are the clear green water valley, caves with the shimmering crystal stalactites that was once a bold mark of the historic Hoa Lu capital. Trang An is a rare place with “the mountain as the citadel, the river as the road and the cave as the palace”, which makes more tourists fall in love with this paradise. The temples and shrines seem to be hidden in the cool green canopies, like the echoes of the brave soldiers.

In 2017, this festival took place in three days, from April 13th to 15th, 2017 (from 17 to 19 in the third lunar month) convergence of folk songs recognized as intangible heritage from provinces in the country such as Ha Giang, Tuyen Quang, Phu Tho, Bac Ninh, Nghe An, Hue, Buon Me Thuat, Can Tho, Ha Nam, Nam Dinh, Thai Nguyen. Ngo Dong river stretching for nearly 10 km brought tourists to immerse themselves in the beautiful scenery of the river, folksongs such as then songs, quan ho songs, xoan songs, with the tunable sound of Folk instruments, royal court music, etc. All the tourists’ visit would be a unique tour because the Ngo Dong River became a heritage river of folk songs that visitors could never enjoy anywhere else except Trang An eco-tourism area.

Heritage tunes took visitors on private Ninh Binh tour to Suoi Tien temple – the main venue of the Trang An Festival 2017. Here, visitors could enjoy the specialties songs of the region which is beautifully decorated, displaying the beautiful culture of indigenous people.

A newcomer was at the 2017 Festival, which is the setting for a hit Hollywood movie that attracts millions of viewers – “Kong: Skull Island” This setting was re-enacted in Trang An ecology – where the film was filmed. Every scene in the movie would appear in front of the visitors as if you got lost in the blockbuster movie attracting the world.

This year, Trang An Festival took place in four days, from April 29th to May 3rd (from 14th to 18th of the third lunar month) with a variety of interesting activities.

In celebration of the 1050th anniversary of Dai Co Viet (968-2018), Trang An Festival was held with the theme “Trang An Connected Heritage”, 1050 actors dressed in various costumes of the dynasties (the king, mandarin, soldiers and the ordinary people) reconstructed the ancient space with the parade of soldiers, marching on Trang An ancient street as well as under the historical Sao Khe River, re-enacting naval battles of Dinh Bo Linh. The hearts and minds of domestic and international visitors had been deeply impressed by the images and sentiment about the land and people Trang An – Ninh Binh.

In particular, this year’s Trang An Festival welcomed the art troupes from the ASEAN region converging on the Trang An heritage river to connect and exchange traditional culture, enriching the activities.

If you miss two interesting Trang An Festivals in two years, it is better you take an amazing ninh binh tour in the next year to enjoy all the beauty of folk culture of Ninh Binh, in particular, and the country in general.