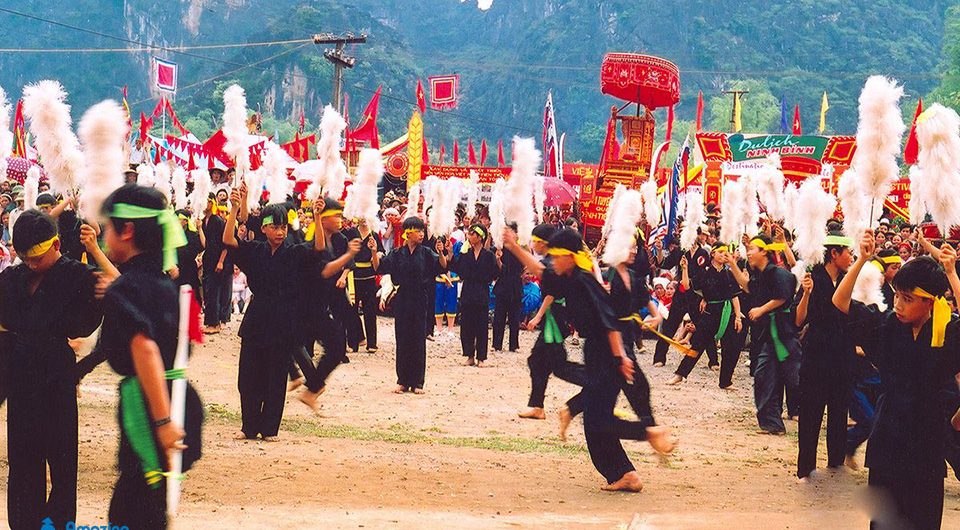 Truong Yen Festival is the largest festival in Ninh Binh Vietnam and recognized as a traditional national festival in 2015. The festival takes place annually from 8th to 10th of the third lunar month, in Truong Yen commune, Hoa Lu district – the capital of Dai Co Viet (ancient Vietnam). The festival was held to commemorate the great victory of King Dinh Tien Hoang and King Le Dai Hanh. 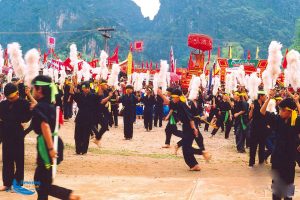 The meaning of Truong Yen Festival

Legend has it that, after King Ly Thai To moved the capital from Hoa Lu to Thang Long, the local people built the temple on the old foundation of the palace to commemorate the merits of King Dinh Tien Hoang and Le Dai Hanh. The festival of Hoa Lu organized by the local community was also aimed at recognizing the great contributions of King Dinh and King Le in building and defending the country.

In the past, the traditional festival in Hoa Lu was mentioned with the name Truong Yen, and its importance was likened as a National Day. Up to now, Hoa Lu Ancient Festival has remained a great meaning in itself such as gratitude to two famous kings in history, who built and protected the country. They were King Dinh Tien Hoang and King Le Dai Hanh.

More than 1000 years ago, after defeating 12 warlords, Dinh Bo Linh ascended the throne (Dinh Tien Hoang) and chose Hoa Lu as the capital of Dai Co Viet, opened the first centralized feudal state of Vietnam. Then the Le Dynasty succeeded the Dinh Dynasty, with the glorious victories in the fight against the army of Song dynasty and protection of the country.

Like other traditional festivals, the festival of Hoa Lu consists of two parts: the ceremonies and the entertaining activities.

The ceremonies consist of two main solemn rituals: the processions, and sacrificial ceremonies. In which, the water procession is considered to be the most meaningful and important activity, organized according to traditional ritual, with the participation of many local people and visitors of amazing Ninh Binh tour.

The procession is led by two rows of people carrying five-color flag. Next are the orchestra and a large palanquin carried by eight strong bearers in the traditional military uniform of Dinh Dynasty, followed by the central and local delegates. The next is the virgins bringing the offerings and the elders, many local people, and tourists joining in private Ninh Binh tour.

Sacrificial ceremony: As soon as the water procession return the festival center stage, at the religious site of the relic, the ceremony is started. The ceremony is carried out at both King Dinh temple and King Le temple with the content of praising the merits of the two kings. Then the pilgrims could burn incense to worship and admire the statues, old architectures, and sculptures.

In the space of the festival, visitors will have the opportunity to admire the two temples of hundreds of years old of King Dinh Tien Hoang and Le Dai Hanh, as well as hear the elders telling the story of the life of these two talent kings. Besides, you can go up to Ma Yen mountain to visit the tomb of King Dinh Tien Hoang and enjoy the wonderful scenery of Hoa Lu, Ninh Binh.

admin
Previous postWhat To Do When Traveling In Ninh Binh? (Part 1)
Next postNinh Binh Tourism In Your Pocket