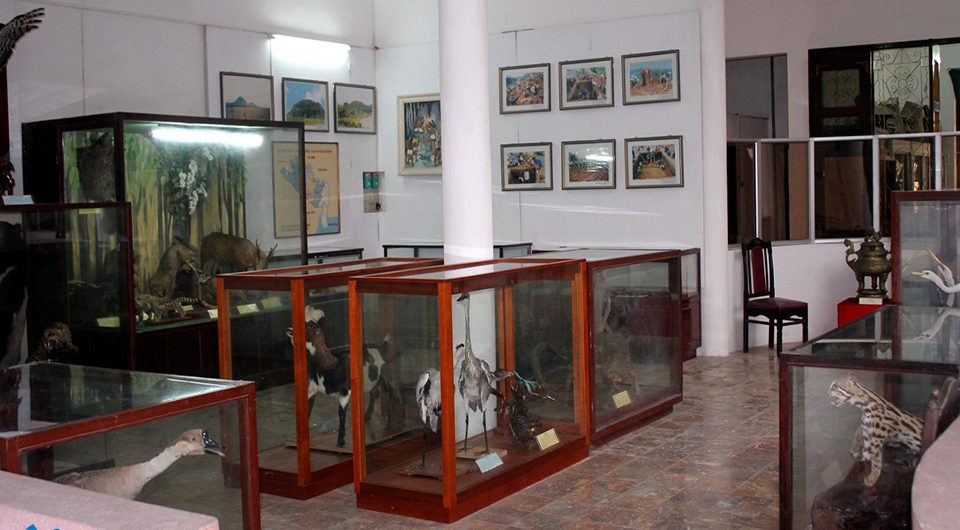 Ninh Binh Museum is an ideal destination for tourists of Ninh Binh group tour who are fond of historic relics and stories. 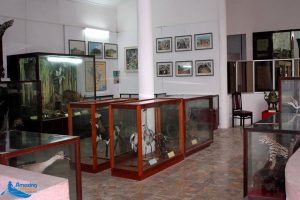 Ninh Binh Museum is located in the south of Thuy Son Culture Park. It is a three-floor house designed as a lotus floating on the bluish blue water among lush green mountains. The four faces are decorated with the images of the bronze drums which have been considered as the symbol of ancient Vietnamese civilization.

Ninh Binh Museum was inaugurated on the first of September in 1995 on the occasion of the 50th anniversary of the Independence Day.

Ninh Binh Museum has an area of 1,200 square meters with the space of 500 square meters used for the historic documents, objects, images on display. The museum has lively recounted the beauty of the ancient land through the period of struggling for the independence of the nation.

For the convenience of the tourist who only have 1 day tour in Ninh Binh, this article will show the display of Ninh Binh in time order.

The imprints of an ancient land in Ninh Binh

Ninh Binh Museum introduce visitors the images, photos as well as objects that belongs to historic nature, natural resources and prehistoric period in Ninh Binh. The collections of wild animals are various, from bears, tigers, leopards, snakes, pythons to butterflies, birds, squirrels and so on. The museum also have many photos of beauty spots in Ninh Binh, which are the evidences proving that Ninh Binh was a beautiful land with abundant natural resources and charming landscape.

Especially, the prehistoric period in Ninh Binh is also expressed through the six bronze drums found in Nho Quan. On the surface of the drums are the patterns and symbols related to the nature and daily life, such as stars, suns, flying birds, grains… These relics reflects the development of the agriculture social and the metallurgical skill of Ninh Binh people at that time.

In the middle of 20th century, Emperors Dinh and Le contributed to the national construction and defense with the construction of Hoa Lu Ancient Capital. Ninh Binh Museum has conducted many excavations in the area of Hoa Lu Ancient Capital and discovered the bricks and tiles used for building the walls and floors of the palace. The collection of Buddhist Bible on pillars was only found in Hoa Lu.

In Ninh Binh Museum, tourists also can see the relics in Ly – Tran Dynasty. Among them is the head of dragon made from terracotta. In the mouth of the dragon held a pearl.

The remains of folk art in Later Le Dynasty protected in Ninh Binh Museum are mainly wood carving and stone carving works. The typical pieces of craved wood are Fairy riding Dragon, Lotus, Fish turns Dragon… Carved stone contains bed of the king, stone dragon, stone Nghe (an animal looks like dog and lion in the imagination of the people)

Ninh Binh Museum stored the historic document of Nguyen Dynasty like literary encourage people to put up the fight against the French invader.

Together with literature, Ninh Binh Museum also preserve the architecture and sculpture works of Nguyen Dynasty such as sculptured stone with shape of lion, four precious plants, phoenix,…

The value historic exhibits of the two resistant wars.

The visitor will have an Amazing Ninh Binh Tour when exploring the historical events during the resistance war against French and American invaders in Ninh Binh Museum.

Here in Ninh Binh Museum, the photos as well as historic items of this period all express the patriotism of Ninh Binh people.

The simple weapons and poor military equipment cannot be compared with the modern ones of French colonialism. However, they took a part in the victory of Vietnamese army over the enemies.

Not only limitary facilities, the photo of the brave soldiers, the red flag pitched on the top of Non Nuoc Mountain in 1929 and the war mementoes are also respectfully displayed in Ninh Binh Museum.