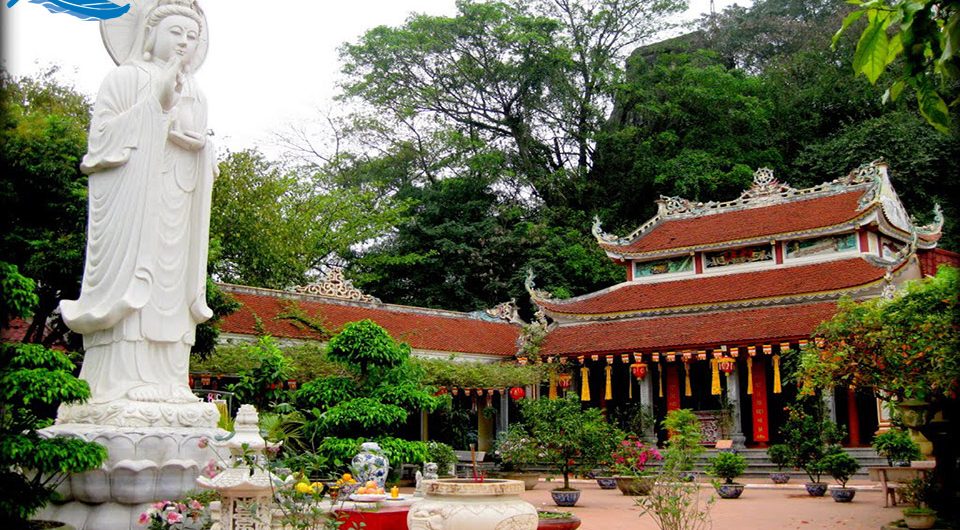 Tourists coming to Ninh Binh Vietnam are often impressed by not only the scenic beauty of the landscape but also the peace of this place. One of the places in Ninh Binh that contains both factors is Non Nuoc Pagoda. 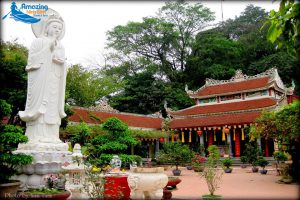 Non Nuoc Pagoda and Non Nuoc Mountain cannot be separated because it was built under the reign of King Ly Nhan Tong at the foot of this mountain. Non Nuoc Mountain and Pagoda has been recognized as a national historic and cultural site and considered an important tourist attraction of Ninh Binh.

Non Nuoc Mountain was named Duc Thuy Mountain by Truong Han Sieu for his discovery of its elegance. The mountain is over 100m high and lies in the confluence of Van River and Day River. The foot of the mountain suffered from the erosion of the ocean waves, so from afar, the mountain looks like an arch roof shading a part of blue water.

Non Nuoc mountain also witnessed the brilliant and glory history of the nation and Vietnamese people.

Besides, Van River which has become the symbol of Ninh Binh tourism together with Thuy Mountain (or Non Nuoc Mountain) also flows through this pagoda. Van River is an affluent of Day River and joins Day River at the foot of Non Nuoc Mountain. Van River is the natural boundary line between Nam Thanh – Thanh Binh Ward and Van Giang – Thanh Binh Ward. This river also holds in it the historical value. Van River attached itself to the victory of our army in the war against Tong Dynasty under the reign of Emperor Le Dai Hnh. The river is also a mirror reflecting the images of many historic places and places of interest in Ninh Binh among which is Non Nuoc Pagoda.

Non Nuoc Pagoda and the ups and downs of LinhTe Tower

Non Nuoc Pagoda was built of stone with the curved roof engraved the winding dragons.

The architectural complex of Non Nuoc Pagoda contains Linh Te tower where placed a main Buddha statue and some small statues for worshipping.

At the end of of Later Le Dynasty, Linh Te collapsed. The ruin of the tower was noted in the book by Pham Dinh Ho about the historical upheavals at that time.

Non Nuoc Pagoda has two entrance, one is in the north and another facing Day river is in the southeast. From the courtyard adjacent to Day River, historic Ninh Binh bridge, modern Non Nuoc bridge and peaceful life of villagers all come into sight.

Non Nuoc Pagoda promises to be the best destination that you should pay visit to complete your Ninh Binh amazing tour.