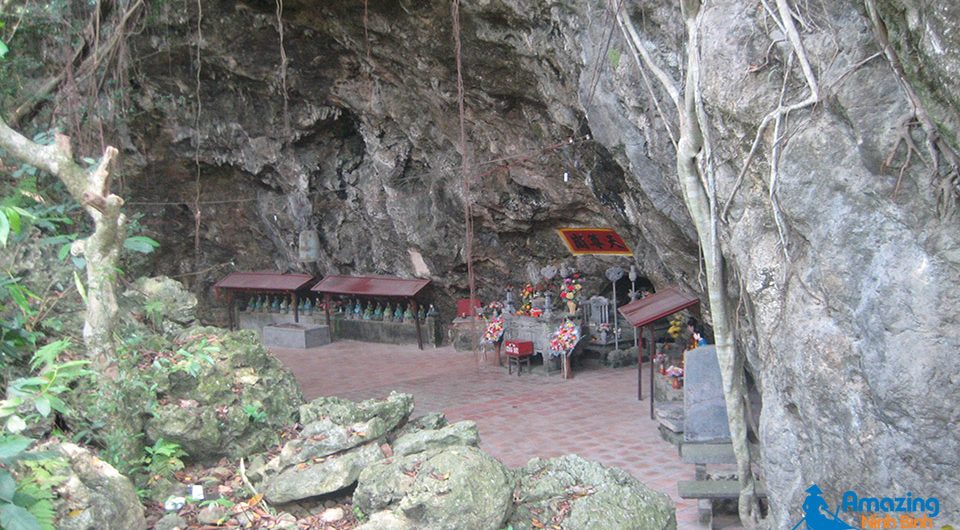 Pagodas play an important part in Ninh Binh tourism. Especially, the pagodas inside the mysterious cave attract many tourists to this land to discover. Thien Ton cave and pagoda is one of them. 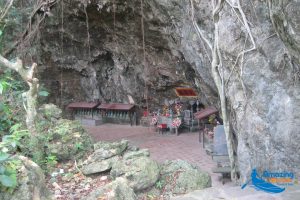 Legend has it that in the 10th century, before leading the troop to fight against 12 warlords, Dinh Bo Linh brought the offerings to Saint Thien Ton and asked for the help of the saint to defeat the other warlords. After ascending the throne, Emperor Dinh Tien Hoang chose Hoa Lu as capital. Here in Thien Ton Town, the emperor ordered to build Tien Te house and Kinh Thien Deck to welcome the foreigners to the capital city.

In 1981, archaeological remains of Thien Ton Cave were discovered. The exhibits include floor tiles decorated with phoenix and lotus flowers, pieces of tower model, pieces of wave sculptures with 3 crests in different size, two statues of small ducks as those in Ly Dynasty, a statue of dragon head in Tran Dynasty, many pieces from lotus pedestal which differ in size and were enameled blue and yellow, many pieces of decorated terracotta… Inside the cave, there is a strange stone object with the rectangular box shape and dragon decoration.

“Dung Duong Son” are the three words that were written on the entrance of Thien Ton cave. It means the mountain that blocks out the stream flowing heavily from above.

Thien Ton is the land where mountains and rivers create the defensive position, so Dinh Tien Hoang and Le Dai Hanh set the outpost of Hoa Lu capital here.

After moving the capital to Dai La, Emperor Ly Thai To still had many architectural works on a large scale built here. Under the reign of Tran Dynasty and other feudal dynasties, this place was still embellished and constructed. Inside Thien Ton pagoda, worshiping objects with the great value of culture and history are restored, such as 18 arhat statues, altar with the incense burner, stone altar decorating with the patterns like “two dragons under the moon”, images of phoenix, flowers… The engravings are sophisticated and show the skillfulness of the artists. Especially, there are two large bells with four knobs which give four different sounds

In 1962, Thien Ton cave and pagoda was recognized as the national relics of spiritual history by the Ministry of Culture Sports and Tourism. This is also the tourist site of considerable stature in Ninh Binh ancient capital tour.

Besides Bai Dinh pagoda tours or Hoa Lu Tam Coc tour, the tourists also can choose Thien Ton Cave and Pagoda as a destination on their spiritual tour in Ninh Binh.